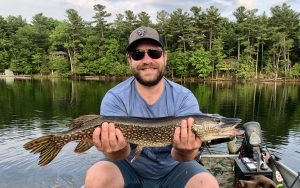 These are my top 10 pike recipes.

Northern pike are such a misunderstood fish. Exceptionally large and toothy for a lake fish, they can reach over 50lbs, though I find the best pike to eat are from 5-10lbs. Smaller ones are great for pickling though!

Many think that pike are “trash fish” and not worth eating, but they couldn’t be more wrong; pike, especially when pulled from clean, cold water are actually one of my favourite eating fish, even rivalling walleye!

I think the reason they’ve gained this undeserved notoriety is due to their “Y” bones, a series of small, Y-shaped bones located to either side of the spine that can be very hard to remove for those who aren’t aware of the special filleting technique. These “Y” bones pose a choking hazard and can make eating pike miserable to those who are used to only eating easy, boneless fillets.

Have no fear though! I happen to have a pictorial guide showing exactly how to fillet a pike so you leave every one of those bones behind. It’s not at all difficult and after filleting a couple, you’ll be able to do it on your own no problem.

How to Break Down a Northern Pike – No Bones

For me, the best way to catch pike is with a spoon lure. I like to use a 5 of diamonds (red and yellow) or a lucky devil (red and white). I cast into the shallows and reel in hard, which seems to be just what the pike like to see. Alternatively, I slowly troll over deeper trenches, pulling a spoon behind me which seems to do a good job as well. There are many ways to fish for pike though, and much better anglers than me, so do some research and see what works best for you!

And now, without further preamble, here are the Intrepid Eater’s Top 10 Pike Recipes!