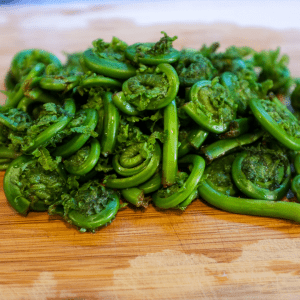 Every spring (late April and early May here in Eastern Ontario) in Eastern Canada and the Northeastern United States, foragers head out on a search for tightly coiled green shoots that resemble the head of a fiddle or violin. Known colloquially as fiddleheads, these edible shoots are a spring time delicacy and only grow within a short window of time, spanning a couple of weeks. With a taste somewhere between spinach, asparagus, and brassicas (like kale, broccoli, etc.) fiddleheads make an excellent table vegetable, either as a side dish, or as an ingredient in spring-time recipes. They can even be dried or pickled in order to keep them longer into the year.

Although fiddleheads can sometimes be found in grocery stores during the spring, the price of them makes finding your own in the wild seem like a much better idea.

This can be tricky though. Not all fiddleheads are considered edible. In fact, only the young shoots of the Ostrich fern are considered safe to eat, and only when prepared properly. Luckily there are a few ways to correctly and easily identify ostrich ferns in the wild, and also easy ways to prepare them safely and properly.

Follow this guide to learn how to properly forage for and cook your own fiddleheads! 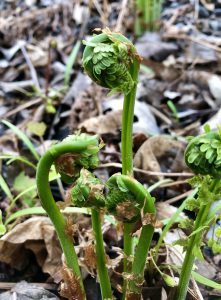 When are they available?

As mentioned earlier, fiddleheads are ready to pick in the early spring. The exact date all depends on where you live and what kind of season it’s been. If you live south of the Canada-USA border, you’re more likely to find fiddleheads in early to mid-April, while if you live north of the border, or in upper Maine or Vermont, you’re more likely to find them from mid-April to early May. Keep in mind also that if it has been a decidedly cold and late spring, then the fiddleheads are more than likely going to be late as well.

Where to find them?

Fiddleheads don’t grow everywhere, but if you do find a spot, there will likely be lots of them! They prefer moist ground near ditches, rivers, creeks, and in swampy wet areas. The best luck I’ve had with them is on sandy floodplains next to creeks in sunny forests and meadows; they seem to really grow in profusion in these types of areas. If you have access to a boat (or good chest waders) small sandy islands in the middle of small rivers or large creeks are often covered in them. Poison ivy also likes growing in these areas, and aren’t likely to have leafed out yet during fiddlehead season, so be careful not to touch anything else around them.

Fiddleheads from the Ostrich fern will always:

If any of these 4 identifying features aren’t immediately noticeable, DON’T HARVEST! 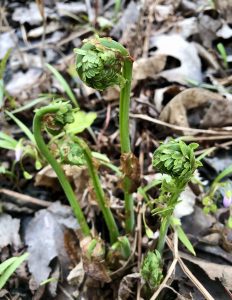 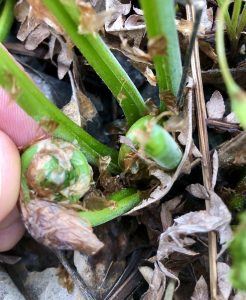 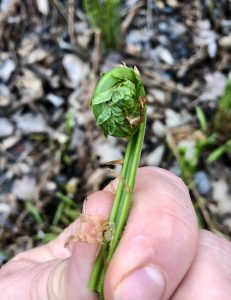 Harvest fiddleheads when they are about 3-6 inches (7-15cm) long while they still have a tightly curled head, like so: 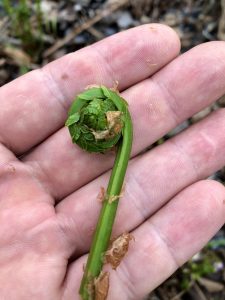 Once they get to this point, they are too far gone to harvest. Sit back and watch them become beautiful ferns. Mark the spot down in your memory or on your GPS/phone for next year. 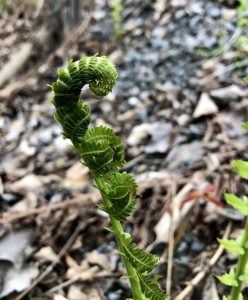 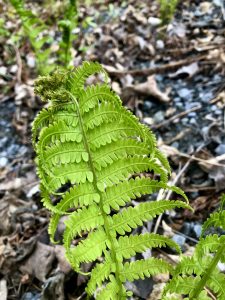 There are many other types of fiddleheads out there at the same time as the ostrich fern that aren’t fit for consumption. Any fiddleheads that don’t meet the 4-step criteria listed above should be left alone.

These are not edible fiddleheads: 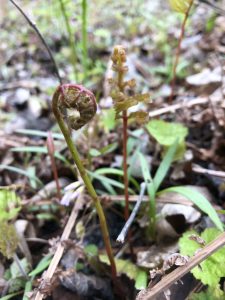 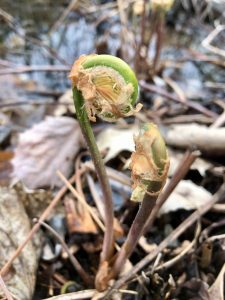 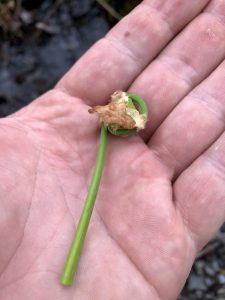 Notice that they don’t match all of the criteria at once. Even though some are bright green, have papery heads, and/or grow in clumps, they don’t have a deep groove in their stem. This means that they are not the right fiddlehead!

How to pick them?

Easy! Just use your thumb and forefinger to snap them off near the base. As mentioned earlier, find specimens that have grown a few inches, but haven’t unfurled yet.

This is the important bit though: HARVEST ONLY ONE FIDDLEHEAD PER CLUMP!

If you harvest sustainably and only take 1 per clump, you will have a never-ending supply of fiddleheads growing in the same spot for the rest of your life. If you take too many, the plant likely won’t survive to grow again next year. Usually when you find fiddleheads, there will be dozens, and sometimes hundreds of clumps in the same area. That means more than enough for you to take home if you only take one from each. Be responsible, harvest sustainably!

How to prepare them?

Once you get home, rinse off your fiddleheads under cold water, them put them in a bowl and cover them in water to let them soak for 30 minutes or so. This will help remove any sand or dirt that may be hiding in them.

Take them out and let them dry. From here they can be put in a container or plastic bag and kept in the fridge for several days.

When you’re ready to cook them, take them out and slice off the bottom end of the stalk, which has likely turned brown. Remove any brown papery skin that may still be clinging to them. 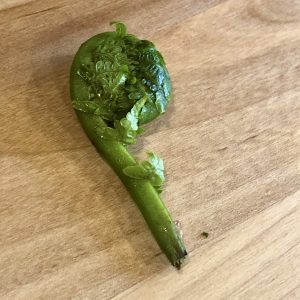 Another important bit: FIDDLEHEADS MAY BE TOXIC WHEN EATEN RAW!

But don’t worry, all you have to do is boil them for 2-5 minutes, then toss out the water. This will remove any toxic elements and make them safe to eat. There are some people who have a hard time digesting fiddleheads though, even after they’ve been boiled. If it’s your first time eating them, don’t mow down a huge bowl all at once, eat a small handful first and see how your body responds. There is some debate whether they are in fact unsafe to eat raw, but I like to err on the safe side of things.

Health Canada and the USDA recommend boiling fiddleheads in water for 10 minutes to avoid illness. I think that 10 minutes is overkill and leaves you with mushy vegetables BUT I don’t know much of anything. It’s up to you to decide how long you feel comfortable cooking them for.

To detoxify them, simply drop them in boiling water for a couple minutes. I usually add a pinch of salt as well to help flavour them as I would any other boiled vegetable. After a couple minutes have elapsed, dump out the water (which will likely be brown now), then rinse the fiddleheads under clean cold water. Now they’re good to go! I wouldn’t recommend cooking them for longer than 8 minutes, as they’ll become mushy.

How to cook them?

Now that you’ve prepped the fiddleheads by boiling them, they are good to use in any preparation you can think of. You can spritz them with some lemon juice and eat them as is, or you can do what many do and sauté them in butter with some freshly minced garlic for 5 minutes. You could add them to salads, stir fries, pasta dishes, risotto, congee, ramen, pho, soups, stews, cream soups, casseroles… the only limit is your imagination (and cooking skill I suppose!).

Try them out in my recipe for Springtime Soba Soup!

You could also take the boiled fiddleheads and place them individually on a baking sheet. Put the baking sheet in the freezer for a couple of hours, then dump the frozen fiddleheads into a freezer bag. Now you can keep them frozen for months!

You could also pickle them (look online for lots of good pickling recipes) either by fermenting, quick pickling, or traditional water bath canning. Some people even dehydrate them, then reconstitute them later in the year. Here are a couple recipes:

My advice is to start simple, maybe with an easy garlic and butter sauté, then begin working them into new and exciting, or your old favourite, recipes.

Fiddleheads are super tasty and very fun to forage for, but the season only lasts for a few weeks. I think that their short growing season makes them extra special. Get out there and take advantage of the mild spring weather and find yourself some fiddleheads!